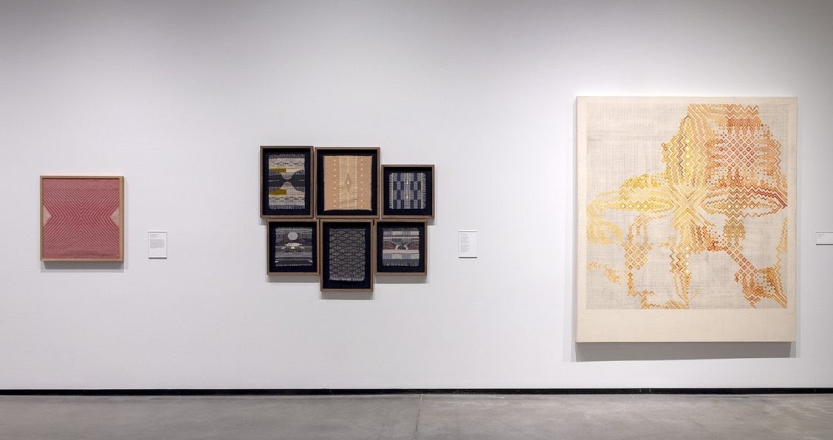 There is a grid. It’s lightly sketched in graphite, floating above the rough canvas and below the smooth paint, between layers–a doubled skin–of clear acrylic. The grid is smeared. Its hand-drawn lines fade from black to silvery gray to shadow. Though to be sure, it is a grid, so in its own way, it also is balanced and regular. It can be filled in. Thick reddish-brown acrylic, washy shades of yellow, and pale sienna define some of the squares. The paint is additive, resting on top of the grid and given boundaries by it, but also not quite constrained by those graphite lines. It expands in kaleidoscopic patterns across the canvas–kaleidoscopic because the squares are fragmented and disintegrating, not belonging entirely to the rhythm of repetition the way pattern usually does. And yet, in the same way the grid is there and not there, the blocks of colour very precisely embody a pattern.

Kim McCollum’s painting is entitled Cipher. Its strange visual presence delivers that sense of a text transformed to conceal its meaning, a message in code. While she painted, McCollum was working from a mid-century weaver’s guild pattern (as is the case with all of the paintings in the Cipher series). Her practice speaks to the complexity of deciphering; weaving drafts are only completely legible to the eye of a trained weaver, someone like McCollum herself, who can take in an abbreviated abstract of a pattern and envision the entirety of the work emerging from it.

A grouping of McCollum’s weavings is displayed next to Cipher. When talking with the artist about this body of work she explained the basic apparatus of weaving, the loom. The loom is an instrument for creating tension, so that mobile threads called the weft can be passed under and over the tightly strung, immobile warp. This requires coordinated performance of hand on shuttle (controlling those weft threads) and foot on pedal or treadle (pulling up the threads of the warp to create gaps for the shuttle to move through). The wonderful Anni Albers (1899-1994) describes such working of the weft thread (wools, cottons, horsehair, hemp, paper) as a way of arriving at surface qualities that are “rough and smooth, dull and shiny, hard and soft…” with the element of “color, and, as the dominating element, texture” (1944, 53). Weaving demands polemically different sensitivities: the intuition of the weaver as she adventurously feels her way forward and her careful attunement to mathematical rigidities of the grid.

Take, for instance, the small weaving Linen Cross Warp V. Again, there is a grid. Running vertically through the face of the weaving are the doubled linen threads of the warp, exposed and jangling apart at points, tightly bound together at others. They are never quite hidden beneath the delicate weft lines of silk and heavier paper that is worked through horizontally. At the centre, pictorial form is suggested by curving passages of light blue-gray and red, framed above and below by (now-familiar) squares of colour. McCollum mentions stories about weaving, folklore, myths, and legends, symbols that lean into her imagination and are brought to the loom as she goes along. But there is a grid. It provides a grammatical structure of “1” or “0,” up or down, in or out, supporting those organic shapes and spontaneous motions of the hand.

There is something linguistic about this array of grid and pattern and symbol, then, this encoded knowledge of the loom and its mobile threads displayed next to the Cipher paintings and translated into paint. Of course, in a way this isn’t new. Albers taught students at Black Mountain College in the 1930s-40s to decipher typewritten elements of written language–the alphabet and punctuation marks like periods, forward slashes, and parentheses–as weaving patterns.

If Albers was thinking of the typewriter, though, McCollum is thinking of the computer. Another painting in the Cipherseries fully captures the artist’s gesture towards the linguistic infinity of the digital sphere, where the “1” and “0” of the working loom is supplanted by the “1” and “0” of computational binary code. The painting is configured on a grid, but it is a more composed configuration. It bells out like a net or web (think of networks and the www). It spins. Its alternating squares and rectangles in dirty greens, blacks, dusty blues, and off-whites form a vortex. And another vortex. And another.

We’re familiar with the idea of seeing–of beholding–as a form of touch (beholding is a word as much about touch as it is about seeing). McCollum’s paintings show us that touch can be engaged through the act of reading. What is more, touch can be engaged through the act of reading within our online mediasphere where literally everything is behind a screen and beyond our grasp. How so? Entering into the structural language of the Cipher paintings happens because we know the key to the cipher: the language of weavings like the Linen Cross Warp V.  But that entrance also turns on an awareness of the slip-ups, the lost threads and dripping paint, the kaleidoscopic patterns that are built on the surface and then disappear, the vortexes that implode and repeat. The material tangibility of the artwork gets in the way of reading, even as it enables it by making us aware–by heightening our awareness–that that is exactly what we are doing.

There are stakes to this connection between body and mind. For Albers, at the eve of the war it was the material touch of weaving that held the promise of making humanity return to something fundamental about itself. “Anyone seeking to find a point of certainty amid the confusion of upset beliefs and hoping to lay a foundation for a work which was oriented towards the future,” she wrote, “had to start at the very beginning” (1938). A material thing that can be held in the hands and transformed into design (but that also tugged away from its constraints) was, for her, that beginning.

“At the beginning” is a space and time where McCollum also dwells. She surprised me by comparing her artwork with cave paintings. But the comparison makes sense. The palimpsests of horses painted over other figures on rock walls with their own layers, lines, and cracks, reveal an originary form of touch as a mode of history writing and reading. It is at such a beginning that we’re reconnected to something essential about ourselves in this, the digital age at the end of a global pandemic.

The artwork in this review was on view at the Alberta Gallery of Art through August 8. In the month of September Kim McCollum will be packing up her studio and working in Medicine Hat as part of a residency at Ewart Duggan House. Her artwork will be on display as part of a TREX traveling exhibition called Never Ending Poetry curated by Genevieve Farrell in Medicine Hat.

Search STARING AT THE CEILING